The recent sold-out Pitbull concert, the Java Jazz festivals and the upcoming All Time Low concert, among others, are trends indicating these things:

a smarter consumer. I remember not too long ago, pre-sale tickets didn’t sell so well, online or offline; which might indicate consumers who can’t decide on watching the concert or not until the last minute, or, lack of finances. Now presale drives a large number of ticket sales acts as a domino effect for more ticket sales and PR for the concert itself – the consumer knows what they want and can manage their finances better (whether or not it is actually money from parents.

wider acceptance of the internet as a medium for commerce. Also not too long ago, people were still reluctant to pay for stuff online. In the case of the Java Jazz Festivals, they were forced to buy online anyway if they wanted the early bird tickets; eventually, online purchase has become a way for many consumers to ensure they get their tickets, as opposed to standing in line all day at the ticket box.

the internet, via social networks, becoming the dominant communication tool, either for asking feedback on proposed artists, notification of promotions, and announcements of upcoming concerts. Java Musikindo and Java Festival Productions have skillfully used Twitter, Facebook and other means to promote their shows and obtain feedback from the crowd.

I think it’s a good sign of things to come.

It Couldn’t Be More Obvious Than That

So apparently, after 5 years being used by the previous tenant, allegedly, 495 legislator’s houses in the DPR complex are in such a state of disrepair and are up for renovations with a cost of around Rp 900 million per home. Yes, you read that right, per home. With taxpayer’s money, no less.This is totally preposterous! They should spend it on making a twin of the Leaning Tower of DPR.

FPI: The New Guardian Of The Law, And Curator Of Art, As Well 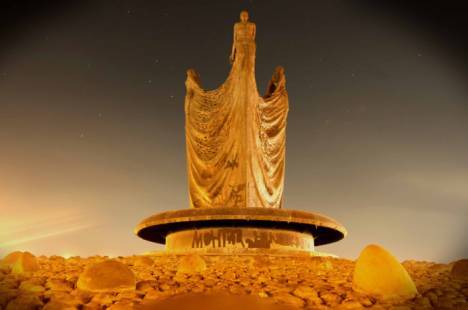 So the statue above is apparently so offensive or something that it has to go, well at least according to FPI, and despite the protests from the artist, I Nyoman Nuarta. The Bekasi mayor has bowed down to pressure and ordered the destruction of the statue within 21 days, citing that it has no permit, among other reasons.

So I suppose we should tear down the Kereta Kencana statue and any other I Nyoman Nuarta work of art (as he always takes inspiration from living things), just because FPI says so.

And this from the group which tried to disband a transsexual rights forum, thinking it was a drag queen show. Bravo! At this rate, they’ll be running the city any time soon.

One Way To Nowhere In Particular

So, Jl. Pangeran Antasari, one of the busiest roads in South Jakarta, is going to be made a one-way street. Problem is, the Jakarta city administration hasn’t figured out which way.Really increases my level of confidence in their planning capabilities…

So, do you have any suggestions of these small blessings unique to Jakarta? Give a comment or tweet us a reply!