So apparently, after 5 years being used by the previous tenant, allegedly, 495 legislator’s houses in the DPR complex are in such a state of disrepair and are up for renovations with a cost of around Rp 900 million per home. Yes, you read that right, per home. With taxpayer’s money, no less.This is totally preposterous! They should spend it on making a twin of the Leaning Tower of DPR.

The government has set up five anticorruption centers in various places in Jakarta. They say that the centers are used to give information on how to fight corruption, and as a preventive measure to encourage anticorruption in the youth.Why does it sound ridiculous to me? Would it be some guy sitting at a desk or a counter, feeling bored, while offering people brochures designed with Powerpoint on how to tackle corruption? Sounds more like a PR stunt rather than a real effort to fight corruption.

But We Were Just Making Some Cash On The Side!

Two police officers were arrested for selling ecstasy; they claim they were instructed by three prosecutors to sell the contraband. Apparently, the pills sold were part of confiscated evidence in an ongoing case.It’s kind of pointless being an officer of the law if you don’t uphold it yourself…

The Lights Are So Pretty

Monday morning, Bulungan intersection near RSPP. I am waiting for the red light, and the roads are comparitively empty. Suddenly, a dark green late-model Mitsubishi passes me on the left, runs the red light, and goes along his way.I look at the plates – it’s a police car, complete with the police insignia.If the police don’t care about the traffic lights, I guess I shouldn’t either 😀 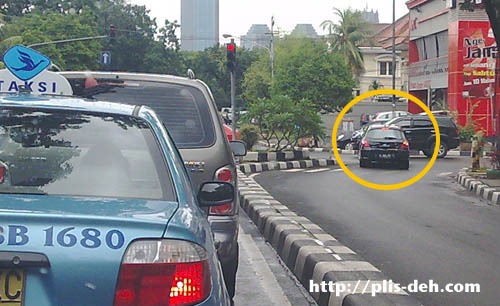 Jakartan drivers are notorious for their tenacity in finding a way to go forward in traffic, regardless of the vehicle used. Gasoline conservation is a must so a vehicle’s momentum must be maintained at all times, and usage of brakes must be avoided at all costs. These basic principles override everything else; stuff like traffic laws, safety, common sense and the like. Like people think about those things anyway.

A coalition of NGOs got together to scrutinize the city budget, concluding that it is too lavish on some points. I agree, there is Rp 1.6 billion set aside for … speech writing? I think presidential speech writing is something necessary, but… on the city level? When was the last time you heard a commanding and heart-rousing speech from a city official? We’d most likely hear a commanding and heart-rousing speech from a student demonstrator, and they do it for free. Not that either speech would be heard by Jakartans in general.But I’m not sure why the NGOs pointed out that equipment for the fire department, at Rp 1 billion, was extravagant. Have they ever seen our pitiful excuse for a fire department? They need all the help they can get.A state budget limit of Rp 12 million for laptops a bit over the top considering that city officials won’t be doing 3D animation or video editing anytime soon, but budget allocations for Rp 35 million laptop? I think someone just has their eye on a nice 17″ MacBook Pro, which would look nice on their desk, be damned if he didn’t have the slightest idea how to use it properly. That’s what the desktop PC next to it is for.When asked about the obvious excess from limits of state budgetary rules, the city official in charge merely said ‘state budget limits do not apply to regional budget decisions’. And this quote is priceless: “.. we have no authority to say whether they are overpriced”. Use your head! The rest of us surely can.On the positive side, at least the public budget can come under scrutiny now. It’s one small step.So, congratulations to Jakartans who have until the end of this month to sign up for their tax number (NPWP). Your future taxes will be well spent, if this is any indication. The question is for whom.

Pay Me To Clean Up My Own River

Trash piled up in the Citarum in North Jakarta. The river supports 28 million people and 20 percent of national industrial output. (Adek Berry/Agence France-Presse) - from the International Herald Tribune

The Asian Development Bank will be lending USD 50 million to the Jakarta city administration to clean up Citarum river.Hm.We actually need to borrow money to clean up our own mess, regardless on whether or not the money will actually be spent cleaning up the river or becoming somebody’s Hummer. And the debt will be paid off at the taxpayers’ expense, including the Hummer.Of course, the ADB will be implementing measures and controls that will somewhat prevent or decrease misuse of funds or corruption, but yeah well… if there’s one thing Indonesians are good at, it’s definitely cooking the books! But you know what? As long as we get the river properly clean and keep it that way, I don’t mind paying for a few Hummers. As long as we know about it.
October 17, 2008

Maybe It’s Because Of All The Smog

BPK reported that the transparency of the Jakarta government, among others, is declining.    Really? You think?

Now If They Would Do Something About Those Bus Drivers

In a controversial case where justice seems to manage to fulfill its promise, a prosecutor – ironically a part of the very justice system – is senteced for corruption charges. Little by little, the Corruption Eradication Commision seems to be doing its job. Let me drop my cynicism by hoping them good luck – they’ll definitely need lots of it. And with all their power, hopefully it doesn’t corrupt them.

Where The [Money] River Flows…

And maybe many, many more comparisons (submit your own!). And the article also states that the majority of the deviance is from “administrative findings”. So, go figure if the potholes in the road remain potholes, schools remain shockingly expensive, and a lot of people still live in poverty.