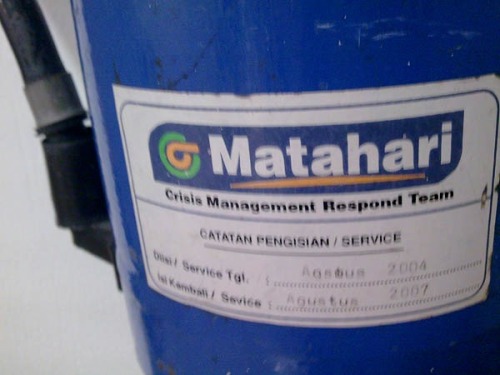 This picture was taken very recently – note the service date.

With everybody blaming each other, more breakouts of violence occured between FPI and some other people wearing Banser T-shirts near the location where Habib Riziek is on trial. I tried to read through and make sense of the article yet I got lost when an FPI guy tied the Banser guys to AKKBB. How are they tied? And why are they so obviously all wearing Banser T-shirts?I’ve seen what happens in these kinds of brawls and things escalate quickly from verbal abuse to the first attack – every party will blame the other for the first strike, without it being obvious on who actually did. At some point the issue is not about religion anymore.

I see on TV that Pakistan only has 3 months’ worth of money left.
The news of melamin showing up in Chinese milk products shows how desperate the companies are for better margins (and more money).
I read about middle-class Californians living in their cars in Santa Barbara, because they lost their homes.
America is digging its own hole with the $700 billion bank bailout.
Japan’s government is a mess while their economy is also hurt by the goings-on in America – and they posted a rare trade deficit.
Russia is pissing off everybody, to no apparent reason.

For all its faults, Indonesia doesn’t seem so bad anymore.

At Least Spell It Right, Man 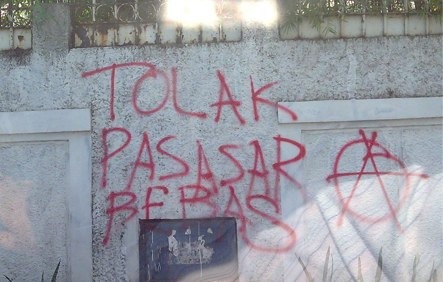 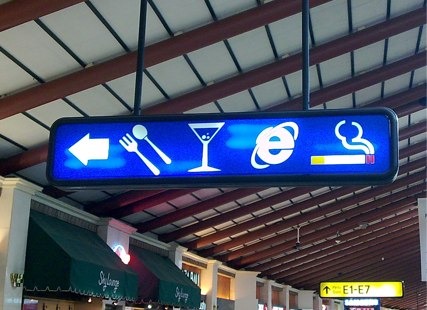 In anticipation of the yearly ‘addition’ of Jakarta pseudo-residents from an influx of people from other areas coming back to Jakarta post-Lebaran, the government is heavily pushing the message ‘don’t come to Jakarta’. There’s a fine for those who do not have ‘the proper documents’.Anyone have any idea what ‘proper documents’ are needed? Might as well charge Rp 5 million entrance fee to each newcomer and give them an orientation brochure on surviving in Jakarta.

You may wonder “eh, am I reading the title right?”

Yes folks, in one weird way, Habib Riziek is my new hero. For a very specific reason.
I don’t agree with him on generally everything else, but for this, cheers to you mate. Somebody finally put the questions circulating in blogs and gossip circles into mainstream media.
September 25, 2008

We Are So Proud!

Soekarno-Hatta International Airport gets 139 new toilets and 9 prayer rooms, as announced at a ceremony inaugurating the new facilities. The event itself was done in one of the new ladies’ washrooms.An official event held in a toilet? Really?

Watch Out For Those Oversize Lizards Roaming The Streets

As part of building a ‘better’ public transportation system for Jakarta, a Malaysian-controlled local company launched its series of buses to be used for the Transjakarta system. Never mind the irony that some Malaysian people actually want to make Jakarta a better place – or just make a buck from us Indonesians – the company, in a misdirected patriotic whim, named the bus ‘Komodo’. Why would you name a commercial product ‘Komodo’? Who’d want to buy something named after an oversize lizard? The Jakarta government, apparently.Komodo is an endangered carnivorous species of lizard indigenous to a few islands in Indonesia, which might translate to these points in the context of Transjakarta:

And You Guard Our Country’s Very Safety

In a small but notable incident last week, a woman and her husband was harassed by a member of the military, although it was said military member who rammed into their car.This is not the first time a member of the military has acted above the law and mistreated common citizens – even I had an experience. I was with a friend in Bogor near a military base, and to turn back we used a small road that led to one of the entrances. When we were waiting for traffic to pass, a soldier came by the car and asked why the hell we were turning there. “This is not the place to turn, you cannot just use this road carelessly,” he said. To my defence, the road wasn’t even in the base’s area as the perimeter was clearly marked by a low wall. “Who are you? Where are you going? You better not be funny with me or I’ll beat you with my rifle butt,” he continued. I think the most violence-provoking act I did was the expression of disbelief on my face – what did I do?Isn’t it strange how these military guys treat us? I’m not saying all are like that – but too often than not, we here these cases time and again.No names were mentioned and thus I am not liable for a defamation suit 😀