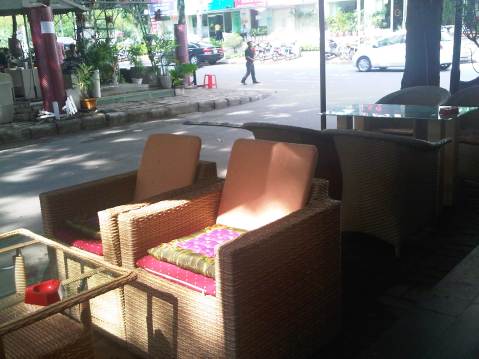 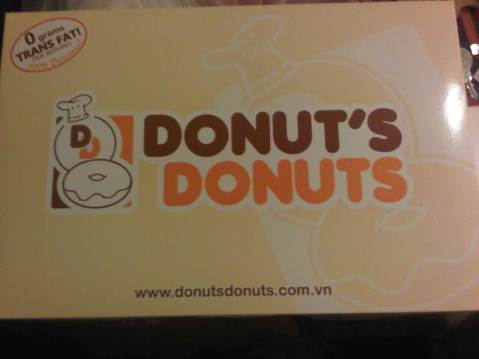 The Lighter Side Of Nguyễn Tấn Dũng

So it started a few days ago. I was browsing for Vietnamese Twitter users (which was relatively easy as there not so many yet) and I found the Twitter account of the Prime Minister himself, Nguyễn Tấn Dũng. So I followed him. And here’s what happened next: 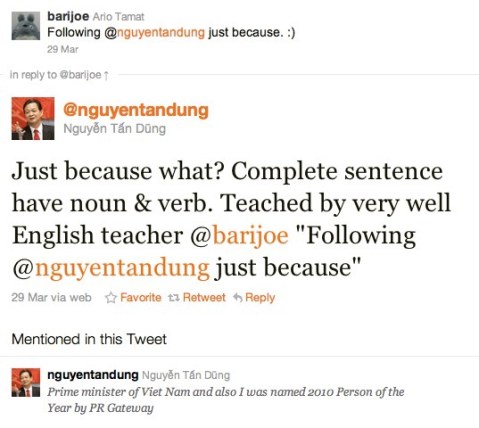 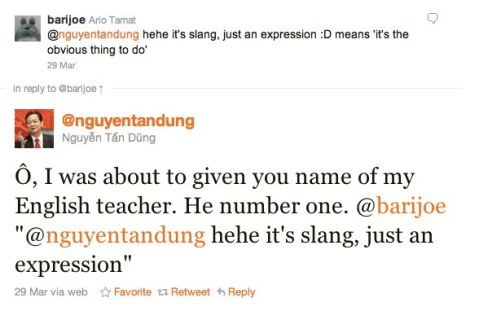 I’ll never be sure if it is really him tweeting (so far I think it really is him) but among his tweets, there are rare comedic gems that would be unexpected from a head of state.

Here’s a compilation of “greatest hits”:

Until up to a year ago, I worked at this little company called Universal Music Group International – not so little; it is to this date arguably the largest music company in the world. UMGI, as the official abbreviation was called, owned the largest catalog of music in the world (this would mean, UMGI owned the rights for commercialization of that music, having a de facto ownership on the recording master). UMGI also owns one of the largest music publishing companies in the world, Universal Music Publishing, and owns – get this – one of the largest merchandising companies in the world, Bravado. UMGI is owned by Vivendi, formerly a utilities company in France, which sold off their utilities business to dabble into media – now owning, among others,  SFR (telco operator in France), Canal+ (cable TV operator), and Activision (of Guitar Hero fame, which I wrote about in another blog post). They also own All The Worlds, which is an event-organizing company which manages F1 Rocks and recent Singfest events. So basically, your basic run-of-the-mill giant multinational corporation. I spent most of my professional life so far at UMGI Indonesia and loved working there, and probably would have still worked there if not for the fact they only needed me in Indonesia, when I wanted to gain some more direct experience working abroad (and thus one of the reasons I am currently working in Vietnam).

END_OF_DOCUMENT_TOKEN_TO_BE_REPLACED

What We Should Learn From Guitar Hero’s Rise And Fall

I know it’s a bit late to write about this, but I thought it’s a good time to reflect on it.

It’s 2008, and Guitar Hero seemingly saves the day. Activision, partly owned by Universal Music Group International, brought a seemingly niche product to the masses, increasing the amount of songs available to play, and even creating band-specific guitars and packages. In other words, a recording company’s dream come true, in the days where piracy is booming and interest in physical music products (CDs, cassettes) have lost interest from many consumers. Guitar Hero brought an enjoyable platform for music for the 21st century, and all the labels needed to do was add up the music library provided in increments.

Guitar Hero was a stroke of genius product – bringing the ‘air guitar’ alive for many, and enabling a much more immersive music experience with a gaming twist to be enjoyed by non-musicians, so to speak. It was a complete platform – gaming, accessories, and music, bundled into one. Sadly, this got old. Efforts to bring the Guitar Hero formula to other music, like DJ Hero, met with limited success. Why?

There are probably millions and millions of songs out there that can be ‘guitar hero’ed’ (formatted to be playable in Guitar Hero), only some made the cut. Some enterprising hackers in Indonesia made Guitar Hero versions of local songs, but that comes to the second problem: there is only so much you can do with 4 buttons on a small, fake guitar.

Gaming platforms make it big as it is possible to play an astoundingly large amount of games with the same interface. Guitar hero made it possible to play, well, a good amount of songs with the same interface. At some point, even the hardcore fans would get bored of the experience, because the experience essentially stayed the same – pressing buttons on a fake guitar following the rhythm and lights on the screen. The songs, as good as they were, became background music.

On the other hand, Activision thought they had found the next great music sales and promotion platform, and proceeded to add to the music offered on the platform, and offer special packages; I.e. the Metallica edition, and so on. You know what this reminds me of? Selling standard album CDs and selling the special premium box set CDs.
So the same ‘music-as-a-commodity’ pattern was implemented in Guitar Hero. It spectacularly worked for a couple of years yet the whole package did not innovate. As a comparison, look at Apple – for each small upgrade and innovation they make on either the Mac, iPod, iPhone, iPad or Mac OS, people will buy it in droves. After a while, the only thing driving Guitar Hero was new song selections, but no significant upgrade to the experience.

I have nothing against Guitar Hero or Activision, but it’s good if we can recognize the fact that it simply had a short shelf life. There was really nothing that could be done to maintain its mainstream success – I can’t think of anything, at least. It just wasn’t meant to last. When it started to use music as the standalone commodity to sell, it started to fail.

Nothing wrong with music either – but as I have said several times, music as a standalone commodity is doomed, whether or not if it stands on a relevant platform. Sure, iTunes as a platform sells millions of songs every year, but how much more music out there sitting on digital players come from P2P networks, friends or even competing, non-DRM stores? Yet, iTunes survives because it is the iTunes ecosystem that remains attractive (and perhaps addictive) for many.
Music as a standalone commodity will always have demand, but that demand will never be as strong as before. On the other hand, music as part of a service gaining ground – if recorded music businesses can work out an evolving ecosystem with technology partners, which offer up music as part of a total experience – that, I think, will work, as long as they continue to innovate.

Music will remain a strong element for business for entertainment, to drive branding awareness, to measure demographics, and many, many other things; but music sales as we know it, will wither. If the next Guitar Hero comes along, recognize that it will have a short shelf life and plan for it.

So, music business is not dead – it just needs to evolve its revenue streams and recognize its place on the media landscape.

This Place Is All The Rage Here In Jakarta 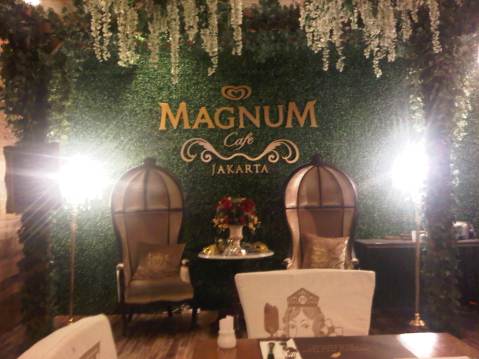 Sent from my BlackBerry® 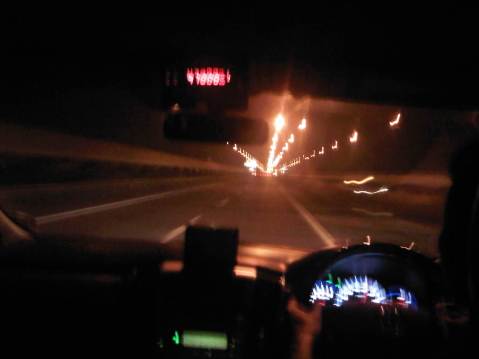